IF YOU LOOK AT THE BEGINNING OF SOMETHING IT HELPS YOU INDERSTAND THE REST.

I love our story. Funny to think about how many times Wade and I could have met or should have. I went to NAU for college and Wade went to Embry Riddle in Prescott, before transferring to NAU. He is was involved in Chi Alpha Christian Ministries and so was I. WE both attended the retreats in Prescott every year. WE never met. God kept us apart until we were ready.

In the fall of 2003 I moved back to Flagstaff AZ. I had been in Louisiana for two years doing an internship for campus ministry and was so excited to be back among my beloved pine trees. I’ll never forget it, I was so elated to finally be on staff at my favorite campus in my favorite town. I had arrived! We were helping the students move in to the dorms on welcome week and taking staff pictures. Kelly, Ryan and I were having a blast getting resettled in my old roots. WE happened to be near the Mt View dorms and they offered to introduce me to the famed pianist Wade Austin. I had heard about him from some friends while I was in Louisiana and although they had mentioned he would be perfect for me, I wasn’t looking for a serious attachment just yet.

He walked down the dorm steps in a dress shirt, dress pants and his socks. I had to smile at the mix of formal and casual he carried off with ease. It wasn’t this ‘love at first sight’ that some people talk about but he seemed nice and cute, and I was definitely interested in getting to know him better.

The next few weeks we got to know each other as friends and fellow musicians on the worship team. I loved singing as he played, he was so quick to learn everything and extremely talented, but nothing romantic yet.

Our added hesitation to think anything could happen came from the fact that I was XA staff and he was a student. IT was a “NO, NO” to date students. Wade didn’t seem to be worried about that at all, but I was eager to make a good impression and very concerned about breaking any rules.

AS things do, it changed on a dime. I was walking across campus when suddenly it began pouring down rain. I was prepared for once and yanked out my big southern umbrella. Just then I saw him rushing across the side walk drenched in rain. I giggled to myself and shouted out, “Want to share my umbrella?” He agreed and little did we know that was the beginning of forever. That afternoon we sat in the Union and hours passed in a blink talking and laughing, over the next several weeks it seemed like I would run into him everywhere. He would offer to buy me a Starbucks, my weakness, I would agree to sit and talk for a few minutes and minutes easily turned into hours. We talked about everything, laughed and without realizing it began to fall for each other.

It was tough because I knew I couldn’t date him. I told him that and he agreed to “wait for me.” It would be at least two more years before he would graduate, I was ‘robbing the cradle’, he was four years younger than me. I talked to my campus pastors about it and they said, “NO dating students!” I tried but the harder we tried to stay friends the more in love we fell. I had to confess to Ryan and Kelly that I let him kiss me, I felt so stupid saying the dreaded words, “It just happened.” They were worried about us making a bad impression on the students but agreed there was a real connection there. One night he invited me to the music building to hear a song he had written. I listened and I just knew that he had written it for me. He literally played my heart on the piano,it was a dream come true. Without words he was able to express his feelings through music, it moved me more than anything, Ever! That night I wrote in my journal, “Oh no, I am falling for him, I am in Love !!!”

When I told my campus pastors, he was the one,that I was going to marry him they had to let God’s plan take its course. The next two years we were friends with intentions and the tension built and built, until we were able to get engaged and announce our love to the group. Everyone was so shocked that we were in love although it cracked us up because we couldn’t imagine it not being so obvious. Wade graduated and one week later May 21st 2005 we were married. Our journey has been one full of adventure and love. I wouldn’t change one sentence of our amazing story. It has been tough and challenging sometimes as all good marriages are, but I never doubt that God has blessed me with this wonderful man. He called us to be lifelong friends and lovers. 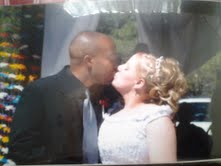 Before we got married we were blessed to take a class offered thru our church called “Life for Marriage”.  It taught just what the name says. How to give life to your marriage. One of the main points was to treat your spouse like you would treat Jesus.  On the same token being like Jesus to your spouse was equally important. These have been important lessons that we try to implement in our marriage. But everyone needs a reminder every now and then…

“Jesus has set an example for us to follow. And, the first place he wants us to put this into place is in our marriage. The Bible very specifically compares Christ’s relationship with the church directly to the relationship between husband and wife. And as we examine the characteristics of Jesus, we discover exactly what we must do so our spouse will see Christ in us.

It’s not just about being unselfish. If you really want your spouse to see Jesus in you, you have to genuinely put into practice an attitude of becoming more like Christ in everything you do. This is not a simple, one-time event; it is an everyday struggle. It’s not easy to act like Jesus in every situation. In fact, it’s notably difficult. We live in a world where it’s much easier to do what feels good or take the easy way out. But, becoming more like Jesus involves sacrificial love; it takes a servant’s heart; it means forgiving when it’s not easy to forgive; and it takes a concerted effort toward humility and self-forgetfulness!”

Check out the full article via Does Your Spouse See Jesus in You? – Focus on the Family.

“As I have loved you, so you also should love one another.” (John 13:34) Ponder the way Jesus loved—self-sacrificing, unconditionally, like a shepherd, forgiving–and choose one element to lavish upon your beloved today.

I want to encourage you today to Fight for your Marriage. Stay in. Don’t jump ship. Every marriage relationship will have mountains and valleys.

Every spouse is going to deserve banishment at some point, but if you tough it out together, God will do amazing and remarkable things in your heart and in the heart of your spouse. He will develop such deep roots in your oneness that you won’t see yourself as two individuals anymore.

I sit here with tears in my eyes as I read about the break up of yet another Christian couple. Most people will say, “I’m so glad you’re happy. I’m so glad you’ve found someone who makes you happy.” I cannot. Divorce is the wrong choice. “Moving on” is not the answer. “Feeling happy” is not enough. A family ripped apart permanently causes deep and painful ripples into the future. Followers of Christ, it should not be so among you.

Don’t think I’m piling on. If you are the victim of a spouse who left, I am not judging you. Allow God to heal your heart. It will take time and love and patience. If you are the one who left, there’s still time to repent and rebuild. It’s never too late.

If you are single, or are facing challenges in your marriage, let me encourage you. Never assume a “strong” marriage is perfect, or that those who have one “have never gone through what you have.” I guarantee you that their marriage is strong because they have had to develop strong roots. Roots take pain and labor.

A great, life long marriage is not built on fleeting beauty, short-term feelings or personal achievement. It is built on self-sacrifice, struggles, determination and sweat. An oak tree doesn’t grow from an acorn to a majestic beauty without these qualities. It is a mystery, but God uses pain to make us stronger.

Have a home date tonight or this weekend. If you have kids, put them to bed early. Dinner can be simple but might include candlelight, soft music, wine or chocolate. After dinner light more candles, look through your wedding album, play, reminisce, make love.

BetterThanNewlyweds.com is a participant in the Amazon Services LLC Associates Program, an affiliate advertising program designed to provide a means for sites to earn advertising fees by advertising and linking to Amazon.com. All opinions expressed in these reviews are our own. We only bring you the products.
*Disclosure: On occasion, “affiliate links” may appear on this website. This means that when clicked and the item is purchased, the seller sends me an affiliate commission. This helps me keep this blog up and running. The item’s price is not affected in any way. Only items I believe my readers will enjoy are linked in this way.
Information is shared for educational purposes. Ownership of content remains with it's original publisher. If you feel we have made an error please contact us know so we can remedy the situation.